For car people and gear heads, Monterey Car Week is Mecca. This year’s Car Week was the biggest and best to date, with a flurry of prestigious events, hundreds of thousands of people from all over the world and every type and shape of car one could imagine in attendance. With so much to do and so much to see, what’s the best way to take a bit of a breather? The answer is to take a little time to visit some of the VIP hospitality villas and suites hosted by your favorite manufactures, and that’s exactly what we did this year. The first hospitality retreat we took was at the BMW Villa, which is located in a secluded villa in the heart of Pebble Bach. A literal hidden gem, the villa was dressed up in an inviting and intimate fashion. At the front steps was a test drive booth, were attendees could test drive virtually any car in the BMW range, which we seized the opportunity to take the i8 for glorious drive. Upon returning from our drive we decided to further explore the villa. Out in the front patio BMW brought their two highlighted concept vehicles for display, the 2017 8 Series and Z4 concept cars. Both looked at home out in full display, which let us know that we were in a BMW fan’s dream house. To further that theme in the first room of the house was a station setup to highlight the BMW Individual Program, in which a customer can custom spec any exterior and interior color and material combination they can think of. The rest of the villa was decked with lounge chairs, couches and refreshment stations, and we will admit having cranberry-elderflower spritzer after a test drive was the perfect way to unwind a bit. 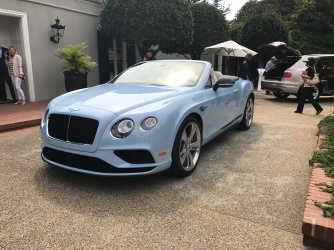 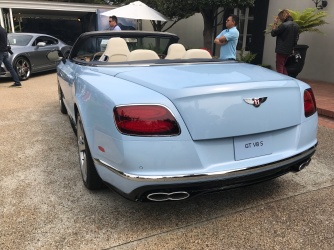 The next stop on our hospitality tour took us to the House of Bentley, which is next to the entrance of the Pebble Beach Concourse. The quickest way to signify that we were at Bentley was the elaborate display of the current model range in front of the massive house. Inside the house, one feels at home in the intimate environment, despite the first room having been converted into a high-end accessory and watch boutique, filled with scale models, jackets and fine watches. The next room feature the Bentley Design Studio, which features a blend of old school handcraftsmanship with technology that seems to be from the year 3017. We got to sample many of the fine leathers used for the interiors of the vehicle, but perhaps the coolest thing was a special app they had on their Design Studio iPads. This app scans your face and then custom specs out a car based on your personality, and it was pretty shockingly accurate with our specs. We decided to make our way to the outside patio, but to do that we had to pass the kitchen where several gourmet chefs were busy cooking a flurry of delicious bite eats. After grabbing some wine, a few insanely good lobster rolls and wagyu beef sliders, we ventured out to the back deck which had a breathtaking view of the ocean. This was a very hard place to leave, especially with those lobster rolls coming fresh out of the kitchen consistently. 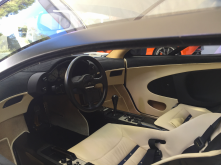 Our third stop was to check in with McLaren. We were pretty excited to be testing out the new 570S Spyder, though we were not complaining about having to spend some time at the luxurious Bernardus Spa & Resort beforehand. McLaren brought out an impressive display of significant cars from their history, from a 1967 McLaren M6A Can Am race car, to the legendary 1992 McLaren F1, to their most recent effort with a 2017 McLaren 720S. There was also a good showing of owner cars, with 4 McLaren P1’s making an appearance with an assortment of 675 LT’s, 570S, 650S, and 720S’ as well. A variety of Asian-themed h’orderves were served and we helped ourselves to some ahi tuna mini tacos while inspecting the McLaren 570S configurator.

Our last stop on the official hospitality tour was with Lamborghini, located at the Quail Lodge Club House. Elegantly situated at the entrance to the Quail Lodge grounds, the club house is the perfect venue for enjoying a refreshing coffee or latte next to the mini-lake at the lodge, before experiencing the fury and insanity of the Aventador S and the Huracan Spyder. It was a very surreal dichotomy: At the lodge, we felt a Zen-like sense of peace and calm, the perfect counter balance to the raw and primal fury of the Lamborghini’s, particularly the V12 Aventador S. It was the perfect calm before the storm, and was certainly the perfect way to end our hospitality tour as we continued the weekend with many other events.

Other noteworthy mentions in the hospitality tour go to Aston Martin, who had a wonderful display and setup at the Sunset Center Carmel; Audi’s Hospitality Paddock at Laguna Seca Raceway, which was highlighted with a speech by 9-time LeMans winner Tom Kristensen; The Rolls-Royce Villa which showcased the band new Phantom; Porsche, who’s hospitality suite at the Quail Lodge made for the perfect mid-day escape and refreshment stop, and Mercedes-Benz, who’s Pebble Beach hospitality suite gave the best views to be had of the Concourse winners as they came to the front stage. If you plan to attend car week next year, we highly encourage you to talk with your dealers and secure an invite to a hospitality suite of your favorite brand or brands, it’s the best way to get the full Car Week VIP Experience.