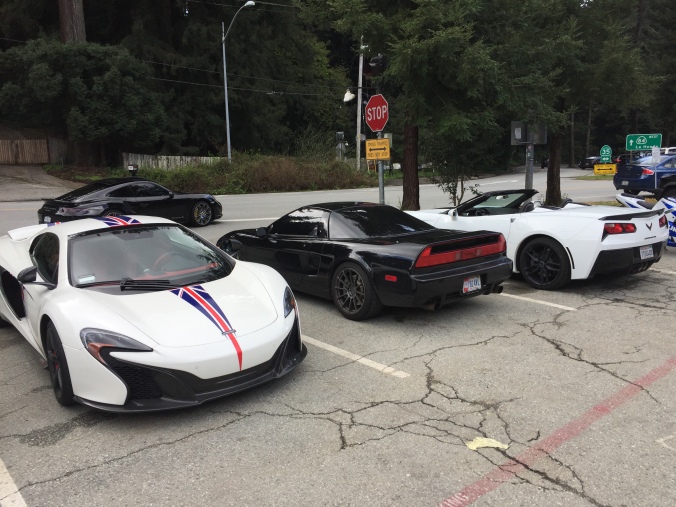 During our recent San Francisco trip, we decided to reach out to a few friends and go a for a drive up San Francisco’s amazing Skyline Road on Highway 84.  What a drive it turned out to be.

Utilizing the app Turo, we snagged a C7 Corvette Stingray convertible with a Z51 package for a great price. The 450 Horsepower V8 in the Vette is a formidable weapon to be in control of, but fortunately it’s very accessible in the C7 platform. Unlike Corvette of old, where mashing the gas peddle was a game of Russian-roulette where either you went fast or went fast sideways into a tree, in the C7 the car is planted and stay planted so you can enjoy the full bellowing of the exhaust note as the world zips by.

Unlike the base model one we drove before, this one had the Z51 package which means that the car has a sportier feel, especially when taking it in the twisties. Top down, race mode on, and the road ahead, we zipped through the forest chasing the other two cars in a drive to be remembered. The Vette held its own on the twists and turns and really made up ground on the straights. The balance of the chassis is really impressive on the car, and if you’re familiar with it’s family heritage it’s very hard to see any relation. That’s what makes the C7 platform special; it’s undeniably American Musclecar glory at it’s best, but it’s also proper fun, it handling amazingly, and you can actually enjoy driving the car instead of trying to wrestle it under control.

Back in the early 1990’s, Honda shocked the world by saying they were going to build a car similar to a Ferrari and then they actually did it. The original NSX is one of those milestone cars because it had the looks and driving feel of a supercar during it’s time, but also had the quality and the reliable family cars that Honda was making at the time. This paradigm shift-cause other supercar makers to get better, and in the big picture it lead the market to make some ridiculously cool cars that had this new thing called quality in them.

In the modern area, the Gen 1 NSX looks like a dinosaur, a remnant of a time long past. But that doesn’t mean the “cool” factor has worn of. Quite the opposite, the NSX is like a velociraptor on the road. It might be ancient, but it can run. It’s handling is sublime, and this particular example has a racing inspired exhaust on it which makes the tiny 6 cylinder engine roar. In the hairpin turns it murders the other 2 cars because it’s crazy light and hyper-agile. In the straights it gets left in the dust, but then again, it was meant to be the best handling car, not the fastest in a sprint.

The 650S may seem like an unfair contender to throw in this contest, but we’re not going to complain about that…ever. Yes the McLaren costs 3 times the combined price of the NSX and Corvette. Yes it is insanely faster in the straights, more hardcore in the turns, and has all the computing power of Silicon Valley built into it. But that’s what makes it a great addition to this group, it’s a third philosophy of cars and that’s radically different than the other two. The NSX is old school, bare-bones go-kart style handling. The Corvette is power on top of more power for great speed and screaming exhaust…because America. The 650S is about using science and engineering to engineer the most superior machine possible. Every millimeter of the 650S reflects that thought process, each polish panel and perfectly aligned bolt was designed with maximum performance above all in mind.

While the Vette and the NSX have very loud and distinct sounds, the 650S is more humble in that regard. But speed wise it is the king of the three, as on the straights it makes the other 2 appear parked and in the turns it can devour them a a frighting pace. But that’s the brilliance of the 650S, it’s not just a driver’s car, it’s a race car driver’s car. It’s the car you take when you need all the 10/10ths you can get. It’s the weapon of choice for the racer who wants to set a new lap record. Simply put it was created for one purpose and it does it brilliantly.

Corvette – America summed up in car, the C7 has proven to be a proper car and a boat load of fun. Yeeha!

NSX – Old-school and zippy, the Gen 1 NSX is a car every car buff should drive at least once.

650S – Mad science at it’s best, the 650S will blow the doors off of most things and connects with your inner Le Mans driver.

If we could, we’d just take all 3 home with us. Each one is a distinct and unique take on the idea of what a car should be, and stacked head to head they each shine in their own right. Which would you take home with you?