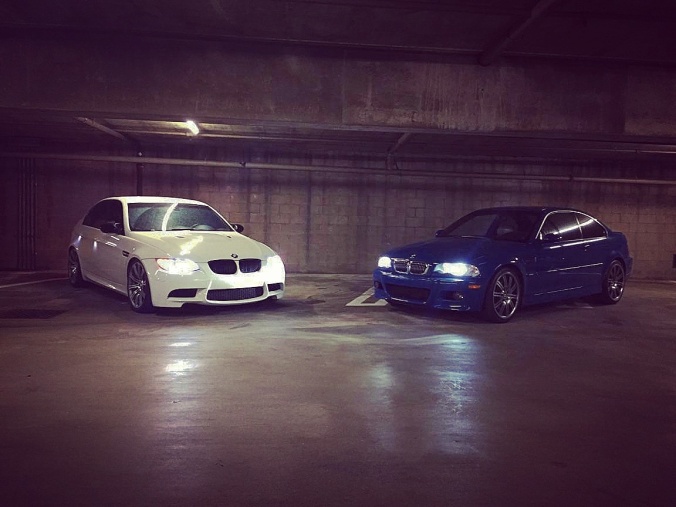 With so many amazing machines on the road now it sometimes becomes easy to take cars for granted. What we mean by that is that in the modern era cars have come so far and performance has become so accessible, you sometimes forget how certain cars became known as the benchmark. One such car is the original E30 BMW M3, which when it first came out in 1986, set a new benchmark for what a performance sedan could be. The next generation E36 M3 continued this tradition, even though the US customers did get a little short-handed by the EPA. In 2001, the E46 M3 came onto the scene and solidified the legend of the M3. And in 2008, the V8 power E90 and E92 (sedan and coupe versions, respectively) took the M3 to another level of insanity. 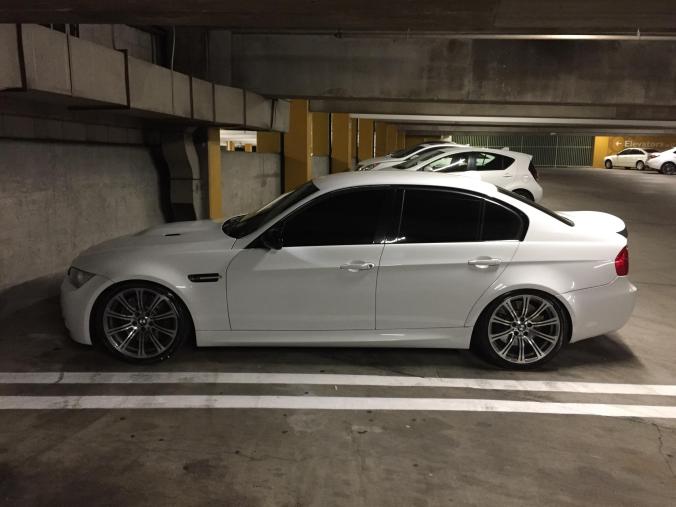 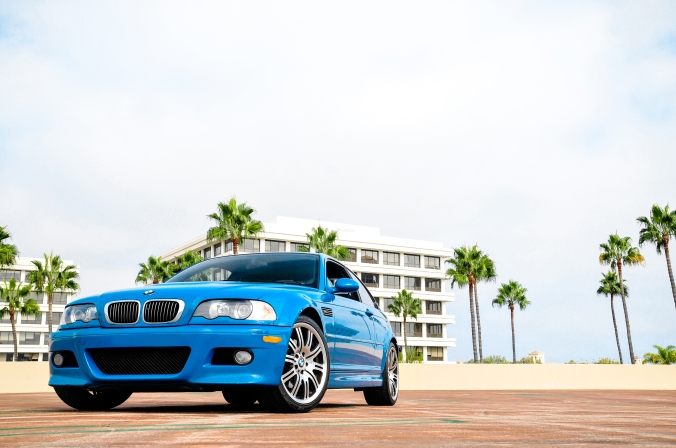 Featuring an inline 6 engine that cranks out 333 horsepower and 262 ft pounds of torque, the E46 M3 had some fairly insane stats for the the time it was introduced. The particular example we have is colored in the flashy Laguna Seca Blue, which was a controversial color at the time but has gone on to become a classic. The color can be subtle (sorta) at times and very vibrate at others, depending on the light. The example we have has a 6 speed manual transmission, which hugely changes the driving experience, as we’ll get into later. The E46 M3 is fairly small and compact car, and somehow the lines are still classic and timeless. It looks very modern and not dated, which is something previous generation M3’s can’t claim. 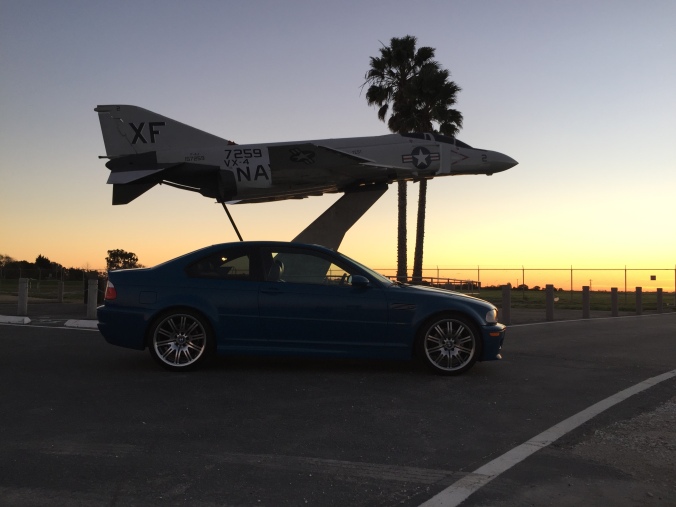 Driving the E46 M3 is a joyous experience, the car is nimble, light and very dialed in. Driving it is a simple “point and go” experience as the E46 is easy to place and the car always feels like it wants to go a little faster, turn a little harder and be a little more aggressive. The recommended driving setup is with the Sport button on and with a manual transmission. The SMG semi-automatic F1 style transmission that is available is notoriously clunky, especially at low speeds, but the manual makes the driving experience sublime. The clutch is light and shifts are effortless, so even a newbie to the manual transmission can learn relatively quickly on this car. The quirks with the E46 is that it is a bit of a noisy car, in that there are creaks and moans the car makes, but usually the sound of the amazing S54 engine can drown them out. Also the E46 can understeer a bit in certain corners at speed, but the back can be broken lose for some playful slides. 10 minutes of driving this car and it’s easy to see why it’s a modern classic and was a home-run for BMW when it was introduced. 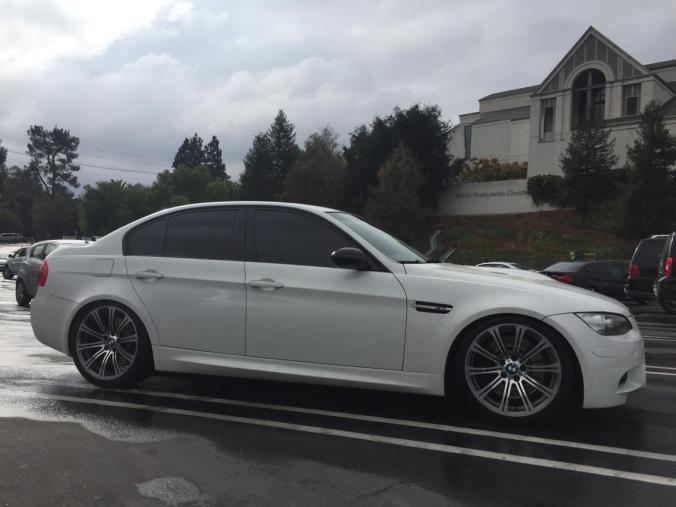 So how could BMW top that? There attempt to do so was with the next generation M3, and we happen to have access to an E90 M3 to see exactly how they tried to do so. The E90 upped the ante, the new S65 engine was a monstrous V8 that had a whopping 414 horsepower and 292 ft pounds of toque. For the transmission you could get ether a manual or the brand new DCT, which was a dual-clutch F1 style transmission that was a huge improvement over the SMG. The car we had was equipped with the DCT, which almost seemed fitting as the E90 belongs more to the laptop generation of performance cars while the E46 belongs to the coal mine generation. 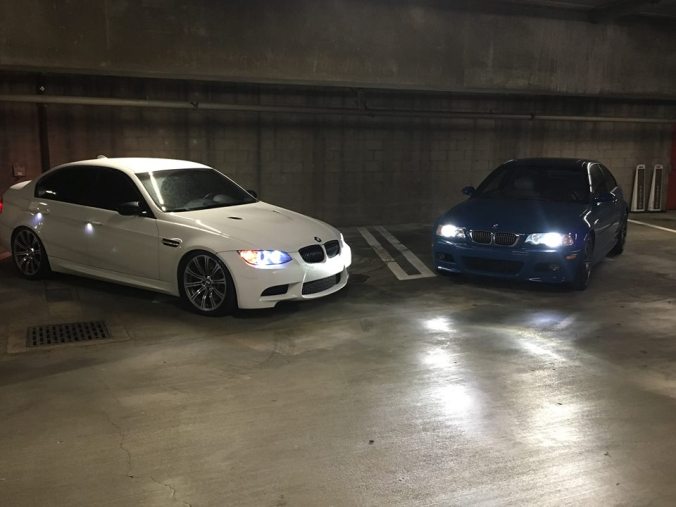 Driving the E90 M3 the first things you notice are the size and the power of the car. The E90 is bigger car than the E46, and it is heavier as well. But it’s also much more powerful and the V8 under the hood never lets you forget that fact. The E90 pulls very hard and hugs the road in a way that makes you believe in witchcraft because like the E46, the E90 is very much a “point and go” car as well. The E90 feels so planted and tells you everything that’s happening on the road that your driver confidence is hugely boosted. Continuing the tradition of the E46, the E90 has that very special signature M Car feel to it. Even with the DCT, the car is quick, agile and a proper driver’s car. Put the car in M dynamic mode and the play factor doubles as the car’s rear becomes easy to slide and catch, which suddenly becomes your new favorite game while driving. 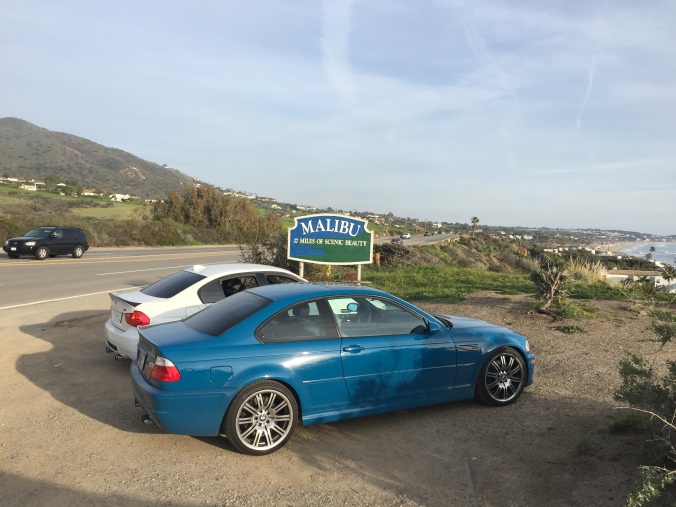 So which one do we like more? It’s a bit of a toss up, but we’re going to give the slight edge to the E46 M3 on this one. The combination of a manual transmission and the slightly more playful driving nature give a little better sense of connection with the road. This isn’t to downplay the E90 M3 at all. It’s more of a generational preference. But both cars are proper M Cars, are proper driving machine, and are amazing bang-for-buck classics that can you buy right now. Do what we did; grab some buddies, grab these cars, and go for a fun drive in Malibu and up the coast to Moonshadows for some mojitos. 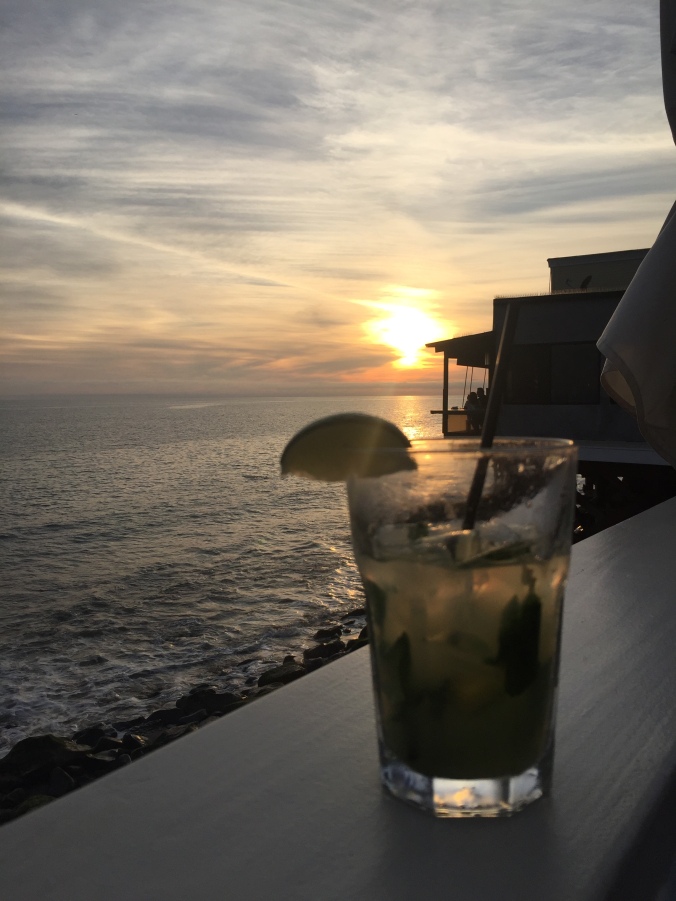