With BMW sharing their vision for the future with their Next 100 Event, they brought out a collection of 4 special concept vehicles to give us a glimpse into what they have planned. To celebrate this fact, BMW brought out a host of electric vehicles for test driving, and naturally we took the chance to give the i8 a whirl. 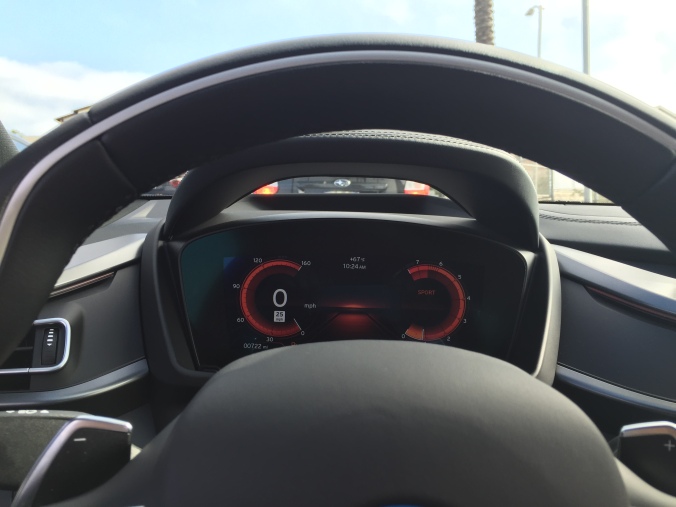 From a looks standpoint, the i8 is stunning. It’s sleek lines and smooth surfaces make it look like a car that came out for the year 2040. We were very happy that the car not only looked mostly like the original concept, but in fact looks better. Being the flagship of BMW, the i8 has a lot to live up to since we are avid BMW fans, and there is the expectation of “The Ultimate Driving Machine.” Our biggest concern is that this new eco-dream machine will lack the soul and fun factor of the BMW brand in favor of subdued conformity.

Getting into the i8 can take some adjustment for those not used to getting into car that low and with a door sill that wide. Fortunately, we have plenty of experience so it was almost second nature. The butterfly style doors are a nice touch to the futuristic looks of the car, and pulling them down does make you feel like you’re closing the cockpit to a flying car out of a movie. The interior of the i8 is very straight forward, there is a cool display on the media screen and in the dashboard panel. The hardest thing to figure out is why there are back seats in the i8. If you where a midget amputee you still would not have space in the back, it probably would be a better use of space to make that additional cargo space. Also with the i8 being electric, making sure the car is on before trying to drive can make a seasoned driver feel foolish, so as with all electric vehicles, always make sure you press the brake and hit the start button for good measure. 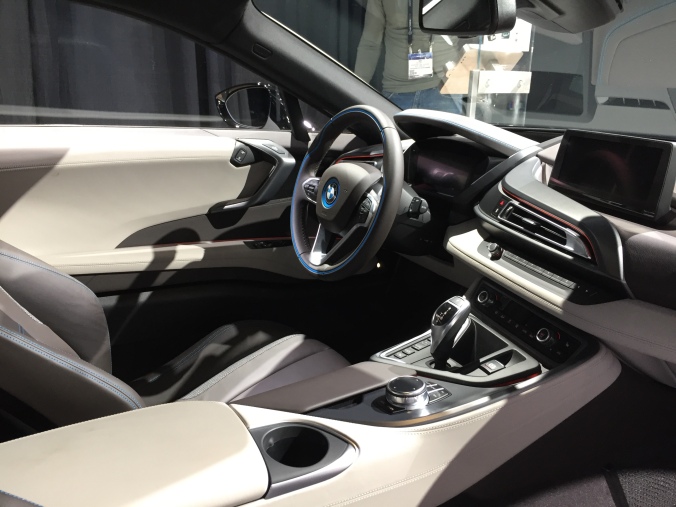 One thing that a lot of electric cars, and modern cars in general suffer from, is that they make use of gimmicks. The i8 is no exception. It is full of gimmicks. When placing the car in sport mode, the dash panel goes from blue to red, the steering firms up a bit, the 3-cylinder engine suddenly gets a noticeable synthetic sound boost, and the in the media center there’s a bunch of displays for various information you shuffle through.

And yet, somehow, the i8 is able to brilliantly pull of being filled with gimmicks. They all actually add up to create a very dynamic experience, and a large part of that is due to the fact that the i8 gets the most important thing right: The way it drives. The i8 drives and feels like a proper car…it’s responsive, you can feel the road and it corners in a confidence inspiring way. It may be a futuristic hyper-eco machine, but it’s still a a BMW at it’s core and that’s the real magic. It feels like an “ultimate driving machine” and it’s a refreshing thing to see, as the trend with more modern cars is to make them more tame and synthetic. The i8 is in a lot of senses synthetic, but the synthetics are augments to the car’s natural ability, not the core of it.

All in all we were very surprised by the i8. In the years to come we think this will be remembered as one of the top classic BMW models of all time. Much like the first iPhone or the Messerschmitt Me 262, the i8 is a design that takes it’s current platform into it’s next evolution. And that’s a gimmick that is one hell of a trick to pull off. 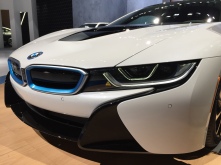